“If you wish to advance into the infinite, explore the finite in all directions.” ~Johann Wolfgang von Goethe 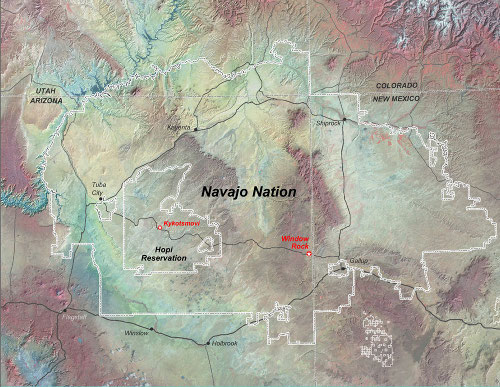 The Navajo Nation occupies over 26,000 square miles (17 million acres) of northeastern Arizona, southeastern Utah, and northwestern New Mexico. Included in Navajo Country is the area along U.S. Highway 89 as well as the I-40 corridor between Flagstaff and the New Mexico border.

Diné Bikéyah, or Navajoland, is larger than ten of the fifty states! Home to the largest American Indian tribe, it is the most land set aside for an Indian reservation within the United States. The smaller Hopi Indian Reservation is also located within the boundaries of the Navajo Reservation.

This part of the Colorado Plateau has many distinctive geologic features such as red sandstone arches, buttes, canyons, cliffs, mesas, and natural bridges. It also contains many places of historic and cultural significance, such as Anasazi pueblos. More than a dozen national monuments, tribal parks, ancient ruins and historical sites are located in Navajo Country.

The beauty and culture of the Navajo Nation draws over three million people annually to this majestic land. Tourists from all over the world are familiar with Window Rock because of the world’s largest Indian Tribal Fair, which is held there during the first week of September.

Visitors need to keep in mind that much of the Navajo Nation is sacred ground and should be treated as such. Hiking or cross-country excursions off established roads without permission is trespassing. Guides are required when going to some places on the Navajo Reservation like Canyon de Chelly and Antelope Canyon.

Points of interest in the vicinity include:

Black Mesa – Black Mesa, in northeastern Arizona, is a major geographic feature of the Colorado Plateau. Also known as Black Mountain, is a high mesa that overlies both Navajo and Hopi country. The mesa has a pine-covered rim of about 8,000 foot elevation at its highest point. It is probably the greatest watershed, both in size and capacity, in the entire Navajo country. Along its “fingers” extending to the southwest lie the Hopi villages and the headwaters of the Polacca, Wepo, Oraibi, and Blue Canyon drainages. Springs fed by seepage through porous sandstone provide a permanent water supply for Hopi villages. Black Mesa is the location of the largest coal deposit in the United States, with seams ranging in thickness from 3 to 18 feet. In 1968, the Peabody Coal Company began operating two strip-mining operations on Black Mesa: the Peabody Coal Mine, and the Kayenta Mine. A controversy over the Peabody Coal Mine arose from an unusually generous mineral lease agreement negotiated under questionable circumstances, as well as the depletion and contamination of the local communities’ sole source of potable water. The Peabody Mine ceased operations on December 31, 2005, when the Mojave Generating Station which it served was shut down for pollution violations. According to the EPA, the coal plant was the dirtiest in the Western U.S. Meanwhile, the Navajo and Hopi tribes were able to pass resolutions ending Peabody’s use of the Black Mesa aquifer, and Peabody’s coal mining permit at Black Mesa was finally revoked on January 5, 2010. Mining continues at the Kayenta mine, which supplies coal to the Navajo Generating Station near Page, Arizona.

Dinosaur Tracks – From U.S. Highway 89, head east on Route 160 and the Dinosaur Tracks site can be found along a left-hand side road before you get to Tuba City. It’s about 5 miles between Hwy. 89 and the turnoff for the dinosaur tracks. Watch for the hand-painted sign. The Navajos who run the roadside stand there are quite friendly and eager to show the dinosaur tracks for a “donation” of $2-10 per person. Some guides are more knowledgeable than others, so depending on the quality and length of the “tour,” you may want to give an extra tip.

Lake Powell – Antelope Point Marina is operated by the Navajo Nation, which has 186 miles of shoreline.

Meteor Crater – Visit the best-preserved meteorite crater on Earth. Admission includes a guided tour of the crater rim that lasts about an hour (weather permitting; it can get extremely windy up there), a film shown in the theater explaining the crater, and access to a state-of-the-art museum with lots of hands-on interactive exhibits. We were going to make that a quick stop on our way home but ended up spending several hours there! Kids of all ages (and adults) who are interested in rocks and space science will love it!

Painted Desert – Much of the Painted Desert region is located within the Navajo Nation, at Petrified Forest National Park, and in Little Painted Desert County Park (13 miles northeast of Winslow on AZ 87; I-40 Exit 257). Scenic viewpoints overlook colorful hills and beautiful sunsets.

Petrified Forest National Park/Painted Desert – This area is a geologic wonderland! Petrified Forest has stunning vistas, erosional landforms, barren badlands, and extensive displays of petrified logs as well as petroglyphs and remnants of prehistoric pueblos. Our 24-mile scenic journey from one end of the park to the other began as soon as they opened and lasted until closing time, as we hiked all of the trails and stopped at every scenic overlook along the way.

Here you will find various suggested itineraries to help you organize your adventure through Indian Country: http://www.explorenavajo.com/go2/itineraries.cfm