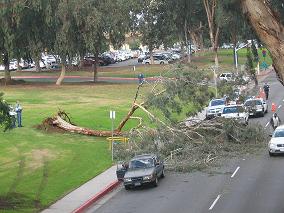 Believe it or not, there is a car hidden underneath that tree!
After the rain, it stayed windy all day. It was REALLY windy! As we were walking through Balboa Park, palm fronds were blowing off the trees. One big branch fell down onto the sidewalk with a loud CRASH. Luckily no one was standing underneath it at the time. Later, we saw that one area of the park by the International House had been roped off because of all the branches falling off an adjacent row of trees. The water from the big fountain at the end of El Prado was blowing sideways! We were standing near the fountain when all of a sudden we heard a squeal and a crash on nearby Park Blvd. We ran over there to see what was going on. First we saw a taxi that had spun around and was facing the opposite direction up on the sidewalk. We stood there for the longest time trying to figure out how that had happened. It wasn’t until we walked across the bridge and looked on the other side that we got the whole story. A big tree had fallen down across the road, landing on a parked car and hitting another car. Too bad we weren’t standing on the bridge at the time – it would have been an amazing sight to see that tree tipping over, although it must have happened pretty fast. The emergency vehicles came and the lady in the car was okay. I wonder where the person in the parked car was. They were in for quite a shock when they returned to their vehicle! A bunch of people were standing up on the grassy hill watching and we walked over there, too. For such a large tree, it didn’t have a very big root ball where it had pulled out of the ground, so no wonder it was easy for the wind to blow it over. Maybe they watered it with shallow drip irrigation and that’s why it didn’t develop a strong root system. Anyway, the park crew came right away with their axes and chain saws to cut up the tree and remove it. There was a big traffic jam, of course. A couple of cameramen showed up, and later on when we got back to the hotel we saw it on the local news!
Posted under Uncategorized and tagged with Balboa Park, San Diego
Comments (0)