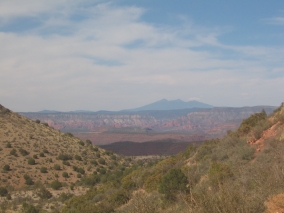 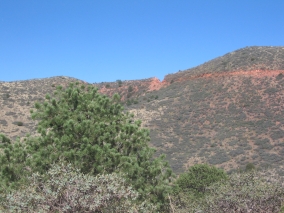 This was one of the most scenic road trips ever! All these years, we never realized there was a back road to Jerome! Be sure to stock up on gas, water, and snacks before heading down this remote route because you won’t find any amenities once you leave Williams. Starting at in downtown Williams, take Forest Road 173 () south and just keep going.

is about 50 miles long and the first half is paved, while the rest is gravel. The road is a little dusty and bumpy in spots, but overall it’s a really nice graded road. In fact, we were wondering why this lonely road out in the middle of nowhere would be so well-maintained. We passed a couple of forest ranger trucks coming from the opposite direction, and only a few other people along the whole way.

The road begins in the Ponderosa pine forest of the upland plateau, then it gradually drops down the side of the Mogollon Rim. It’s such a straight road as it gently slopes downward that you hardly even notice, but when you look back you can see the Mogollon Rim behind you. It’s the western end of the same plateau that juts up near Payson and cuts across the center of .

From there, the road enters juniper-and-piñon country followed by the high-desert terrain of the , and crosses the at historic Perkinsville Ranch. This deserted ranch is nestled between two national forests and adjacent to a designated wilderness area, not to mention the wild and scenic river flowing through a beautiful valley.

The Verde River starts at Sullivan Lake, where Big Chino Wash and Williamson Valley Wash merge south of Paulden, then flows south by southeast about 170 miles before reaching its Salt River confluence. The Verde is a perennial stream, which is unique in a state known for its dry riverbeds, although its water level varies greatly depending on the amount of snowmelt and rainfall runoff it gets from the mountains.

In 1864, it was here that James Baker and his partner James Campbell started one of the largest cattle and horse operations in . They called it Verde Ranch after the river than ran through the open range of native gramma grass in this central . The severe drought years of the 1890’s, however, forced the partners to sell.

The Verde Ranch was purchased by Marion Alexander Perkins. The Perkins family sold beef to the miners in Jerome, and starting in 1912 when the Santa Fe Railway built the Clarkdale-to-Drake standard-gauge spur through there, they could ship cattle to market right from the ranch. The railroad depot near the ranch headquarters was named Perkinsville. The heyday of Perkins Ranch ended with the closing of Jerome’s copper mines in the 1950’s. In 1962, Perkinsville regained some prominence when How the West Was Won was filmed on the ranch property and also at the railroad bridge. It’s hard to believe that such a once-bustling place is abandoned now, vanished just like the Indians who lived there centuries before.

Stop and take a swim or go fishing in the river if you want, then you have a choice of driving up the rugged hills to Jerome, or continuing down into Chino Valley. The winding road up to Jerome seemed a lot scarier to me than the road up . This portion of the has quite a few hairpin curves of its own, but this time it’s along the edge of cliffs with no trees or guardrails to add a sense of safety. Although coming from this direction, at least you are on the inside!

At this point you’re actually following an old narrow gauge railroad grade that went from the mining town of over to the settlement of Jerome Junction for transferring loads of copper. Lots of laborers lived in Jerome Junction which had a hotel, store, and saloon. It’s just east of where is now but there’s nothing left of Jerome Junction today. However, the whole area is a unique geological wonderland featuring rugged desert canyons, crimson cliffs, and spectacular panoramic views.

When you get to the part where the road goes through a couple of narrow cuts in the red rock, you know that you are getting close to Jerome. You will come around a bend and go down past the Gold King Mine and Ghost Town on the outskirts of Jerome. After that long desolate drive, you are suddenly thrust into the midst of a popular tourist haven, where even a parking place is hard to find along Jerome’s main street!
Driving time: Allow at least two hours one way, or more if you like to stop and admire the scenery. 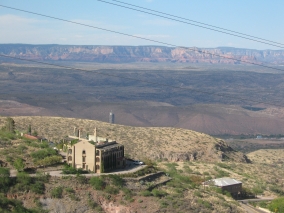 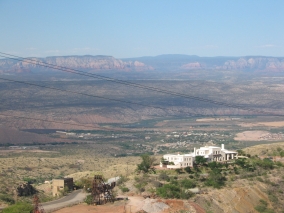