On Saturday night after the Beale presentation, we left and got onto Route 66 heading west from toward Williams. (As you’re leaving , just continue straight through the intersection at Hwy. 180 to get onto Old Hwy. 66.) Route 66 takes you out of as it runs diagonally toward I-40. Then we had to get on I-40 for a while, but we got off on which again is the same as Old Route 66. After a while, just kind of turns into Forest Road 74 and heads north past the Pittman Valley Helibase and an El Paso Natural Gas compression station.

After that, the road becomes a dirt road as it continues north and curves to the east (which incidentally is where one of the segments of the Beale Wagon Trail is located). Along the way we saw a couple of deer on the side of the road and a raccoon, its large round eyes glowing with the reflection of our headlights. We set up our tent alongside FR 070. (We would have camped on FR 75 except for the grave, which was a spooky thing to encounter in the woods at night. It looked like a large mound with a white cross on top. In the morning we went back there out of curiosity and it was simply a pile of rocks and the marker said “MAX WILL’S BEST FRIEND.” Poor Max!) We also saw a large herd of deer near there, on both sides of the road. 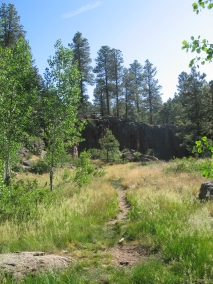 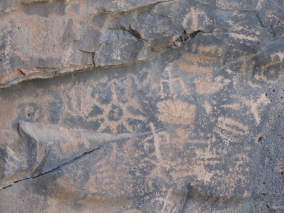 Heading back in the direction from whence we had come, we turned onto and stopped at the Oak Hill Snowplay Area so that we could walk to the Keyhole Sink. It’s an easy mile-long trail through the forest down to the base of a basalt cliff that has petroglyphs on it. One incredibly detailed petroglyph is a dramatic depiction of some Indians hunting a herd of deer at this very spot. While Keyhole Sink looked like the kind of place that Beale would have stopped at, there were no other markings except for the petroglyphs. Perhaps that’s because it’s not a year-round water source. When we were there it consisted only of damp mud – and lots of bugs! But it also contained a natural garden of roses and irises that were just past their prime bloom. What a wonder to see these flowers growing wild out in the middle of a forest in of all places! 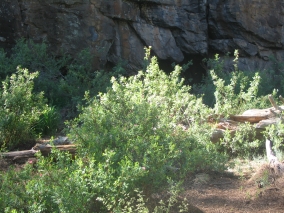 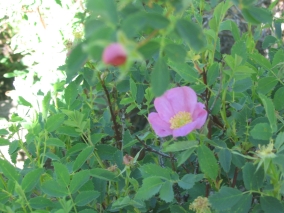 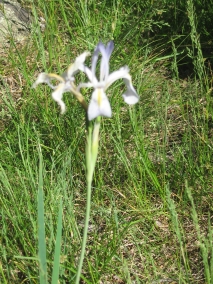 When we got to the town of later that morning, we were just in time to see the Grand Canyon Railway train pulling into the station. The steam train is really impressive when the steam is hissing and the bell is ringing – and it’s really loud, too! We ran right up next to it so we could even see the fire inside and the smallest valves moving. We stood there for the longest time looking at it, it’s such an interesting piece of mechanical equipment to watch. (See movie clip here) We had no idea how long the train was going to be stopped there, and by then it was noon so we walked over to the main street to get something to eat at Old Smokey’s Restaurant and Pancake House. Old Smokey’s opened for business in 1946 and it’s been in that same location for over 60 years, so it is truly a Route 66 original. When we came back out an hour later, the train was gone.

After lunch we walked to the Williams Visitor Center on the corner of and , which is located near the train station just down a ways from where we had parked. At first a tour bus loaded with Japanese tourists was stopped there, but soon they left and we had the place mostly to ourselves. The building itself has an interesting history as the Santa Fe Railway depot for Williams and the . Built of brick in 1901, it was later moved across the tracks for use as a freight depot. Restored in 1994, it is listed on the National Register of Historic Places.

The is jointly operated by the Williams-Grand Canyon Chamber of Commerce and the National Forest Service. One half of the visitor center is full of information and racks of brochures for the local area as well as from all around the state, while also offering a variety of books, maps, and souvenirs to purchase. The other half is a museum with interactive exhibits explaining the history of Williams, the prehistory of the area, Route 66, forest ecosystems, fire ecology and water conservation. (For example, did you know that just by turning off the faucet while brushing your teeth you save 3-4 gallons of water?) A “Kids Corner” offers hands-on activities for the family.

This is an excellent, must-see visitor center – f
amilies will especially appreciate being able to view all of the interesting museum-quality exhibits for free! The is staffed seven days a week, and for after-hours visitors there is an interactive computer that provides information. The rangers there will be able to answer any questions that you have, too. They gave us a couple of handouts showing how to get up , which was where we were going next.