“The Lonely Mountain! Bilbo had come far and through many adventures to see it, and now he did not like the look of it in the least.” –The Hobbit

SP Mountain, also known as SP Crater, is an excellent example of a cinder cone and its associated lava flow. Plus it’s in such pristine condition, it appears to have just stopped erupting!

-SP is located about 25 miles north of

-The unmaintained dirt road is freely accessible by car but there are no facilities for miles around.

-Best time to go is in spring or fall; in summer go early in the morning and bring plenty of water.

-The moderate 1-mile hike is more like a steep climb on a loose cinder surface.

-From the rim, SP crater is approximately 400 feet deep. 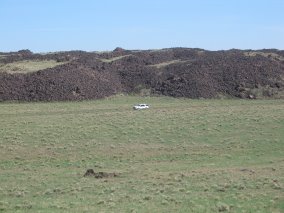 We first discovered the SP Mountain area while scouting out campsites in northern last August. We were surprised to discover a large outcropping of thick black lava just north of the Coconino National Forest boundary. This was right after we had been to El Malpais National Monument in , an extensive lava bed south of Grants. 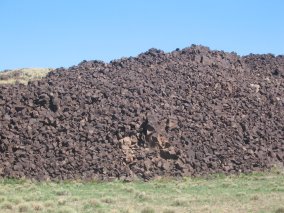 Well, this lava flow easily rivaled that one, and yet we had never heard of it! Then it wasn’t until we got back home and Rich looked it up on Google Earth, that we saw the volcanic cinder cone from where the lava had come! It was a perfectly symmetrical conical shape with a rounded crater on top, just like the classic volcano picture that little kids draw. 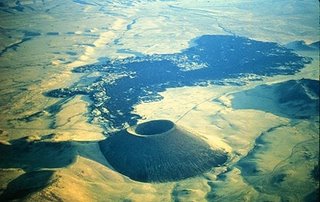 Geological Survey Photo of SP Crater and Lava Flow.
The long narrow depression in the upper left is a fault line.

Of course this meant that we had to go back there and explore some more, but most of our weekends were booked up. Then when we had a chance to go back in October, one of our kids was sick. Finally on June 7, 2008, we were able to return to SP. In the meantime, this gave us plenty of time to research the area and plan our trip. 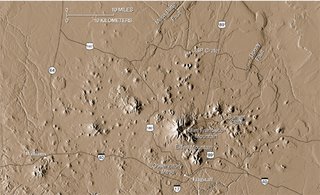 The above USGS Digital Elevation Model shows many of the more than 600 vents that have erupted in the 1,900 square mile area of the San Francisco Volcanic Field, a localized “hot spot” the Coconino Plateau meets the southern edge of the Colorado Plateau. SP Crater is a cinder cone located at the northern end of the volcanic field, which includes Sunset Crater to the southeast. It gets that name from the red and yellow oxidized iron and sulfur particles which give the rim a “sunset” appearance. SP Crater has a less flattering name; its initials apparently mean “Stink Pot.” 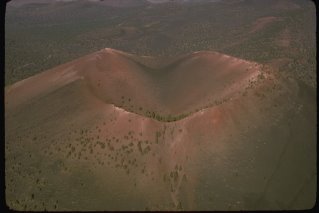 Sunset Crater, considered to be the state’s youngest volcano, erupted several times between A.D. 1064 and 1250. It’s been preserved as a National Monument since 1930. There is not much information available about SP Crater even though it is just as good if not better than its more famous neighbor. However, SP Crater is popular with geology students for obvious reasons such as its sharp rim, steep flanks, and radial symmetry. They say that it’s one of the most symmetrical cinder cones in the world. We took this picture of SP at sunrise – that golden glow was fantastic! 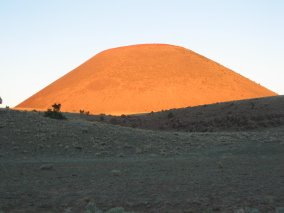 You will pass by the entrance to on the way to SP Crater. To get there, head north on Hwy. 89 past . The picturesque will be on your left. Once you get out of town is when you will see the signs for Sunset Crater and . It’s a loop drive, so there will actually be two signs. Keep going north on Hwy. 89 till you pass the second sign. 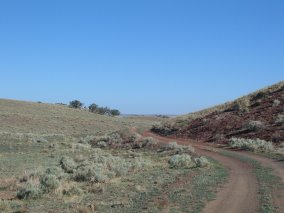 Just past the second turnoff, and just past Mile Post 447, is an unmarked cattle road. Go west on the cattle road about 5.2 miles, then watch for another unmarked dirt road which heads south and goes behind a hill. (Once you get around the other side of the hill, you will see that it is actually a reddish cinder cone.) These roads are dusty but flat and passable to most vehicles in good weather. Now you will see this view of SP crater directly west of you:

And this view of (still snow-capped!) in the distance: 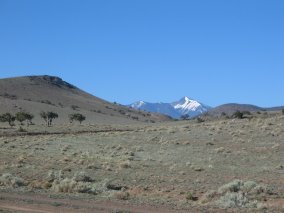 Keep driving south and shortly you will arrive at a fork in the road. Take the one that curves west toward SP. You will drive past a corral and a round metal cattle trough. We saw a bunch of cattle, including calves. When we stopped and looked at them, they stopped and stared back at us too. They were branded with the letters CO and we found out later that SP Crater is on the Babbitt family’s ranch land but they leave it open to the public. 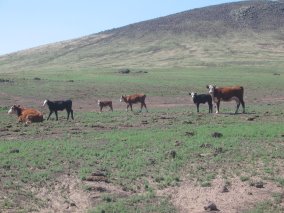 Just up ahead you will see the SP access road. It branches off to the right across a field and turns into a narrow two-track road that heads up a ridge adjacent to the west side of SP. However, that part of the road is closed off with a little white sign that says “Foot Access Only.” So we stopped and parked right there.

Parents with small toddlers and others who don’t want to climb up the cinder cone can explore the base of the volcano, which is where all of the larger rocks settled. Kids will love scrambling on the rocks and running around the grassy field nearby. Some of the rocks are amazingly light for their size, because they are full of air holes. On other rocks you will see melted areas and cracks. You can also find big rock “bombs” sitting out in the middle of the grass that look like they just landed there. Imagine what it must have been like during the eruption!

The path up to the saddle on the ridge skirted alongside the base of the cinder cone. It looked like it would be a nice leisurely stroll, but considering the altitude of 6,500 ft., even that gradual rise was rather tiring. It was super windy, too, and we had to hold onto our hats. In fact, the wind was so strong that it was hard to hold the camera steady to take a picture! 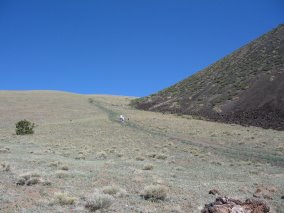 When you reach the saddle, you can look over and see the lava flow on the other side, with a sandstone plateau beyond. The trail you’re on continues down the north side of the ridge, and will take you to the lava field (or you can drive your car around to the lava later). 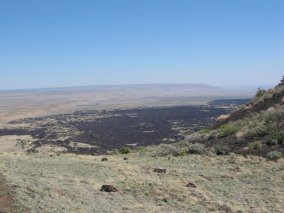 SP mountain rises 800 ft. above the surrounding plain. If you start hiking up the crater from the ridge you’re now on, it will save many vertical feet of climbing. There doesn’t seem to be any particular trail, so just pick a spot and make your way up the loose cinder surface. It’s a rather steep incline, and yet it’s sloped enough that you can walk up without using your hands. 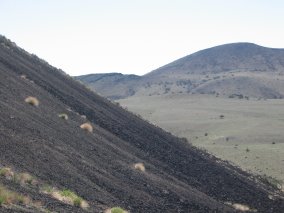 At first the climb may seem easy, but it gets tiring after a while. Just imagine you’re working out on a stair-step machine, or trudging up 1,860 stairs to the top of the … or Frodo and Sam on . Due to the nature of the surface, for every two steps up, you slide one step back. It works better if you zigzag back and forth. So it’s a moderately strenuous climb, but well worth the effort.

Since you’re on a continuous slope, there aren’t any good spots to stop and take a break. If you do want to sit down for a minute, you have to dig in with the heels of your boots to brace yourself. As we neared the top, we got a renewed burst of energy and scurried up the rest of the way quickly. Our family made it to the top in about 40 minutes, but if you’re in good shape and don’t keep stopping, you can probably do it in less time. 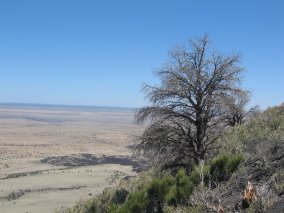 You will know you’re finally near the top when you see several gnarled trees and an outcropping of large rocks; that’s the edge of the rim. Stepping up there for the first time, you don’t quite know what to expect – and then all of a sudden there’s an Imax-quality panorama of a 400-ft. deep crater in front of you. It’s much wider than I thought it would be, too. A photo can’t really do it justice – we should have taken a video and panned from side to side. I attempted to simulate that by splicing two images together, as shown below. If only we had a third one for the left side it would look even better!

The summit was also higher than I anticipated. The top of the crater is at 7,027 ft. I had to sit down and force myself not to look around, or else my fear of heights would overtake me. But everyone else got an impressive view of the , the lava flow coming out from the north side of the crater, and the high desert plateau beyond. 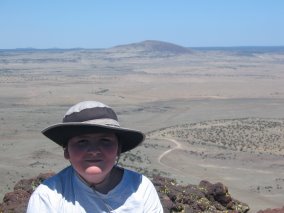 If you’re brave enough to look down into the crater, you can see the bottom. It’s not flat but is covered with a pile of rocks. I wouldn’t advise attempting to climb down to the center; it looked awfully steep. You can hike all the way around the rocky rim, though, if you want to. 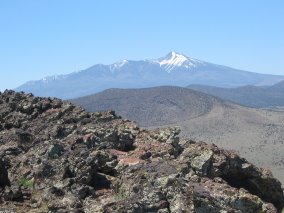 Going back down takes about 20 minutes, and with gravity on your side it was a lot easier than climbing up. I never expected the descent to be so much fun! You really don’t have much choice but to slide down the loose scree on the heels of your boots – it felt a lot like skiing! But it’s such a gentle ride, you don’t have to worry about gaining too much speed or falling on the seat of your pants.

Just be prepared to get lots of cinders in your shoes and don’t bother trying to stop and empty them out until you reach the bottom. The cinders are so deep in some places that I actually sank over the top of my boots! Below, you can see the skid marks left behind from people sliding down: 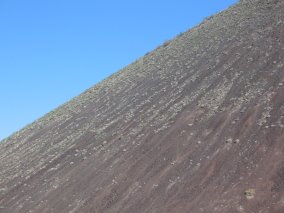 Try to be careful and maneuver around all of the small plants so erosion is kept to a minimum. That’s why nearby Sunset Crater is closed to climbing and hiking. 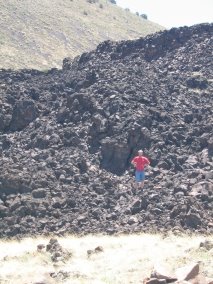 When we got back to the car, we drove around the other side of SP crater to see where the lava poured out from the base. From there, the jagged black rock stretches five miles to the north. The depth of the lava varies from 50-180 feet thick. 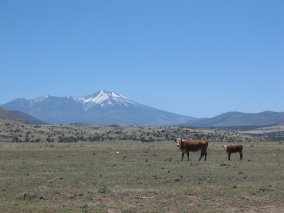 We continued to head west on the dirt road through beautiful wide open country, with the always looming in the background. We came across a portion of the Arizona Trail which runs through there. It’s a 790-mile non-motorized trail traversing the entire state of from to . We came out at the other end of Babbitt Ranch, just before reaching Hwy. 180. 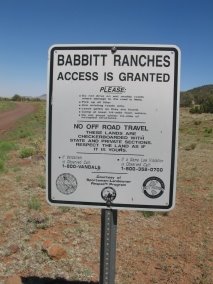 Did You Know…? “Most of the more than 600 volcanoes in the San Francisco Volcanic Field are basalt cinder cones. Basalt has the lowest viscosity of all common magmas. Cinder cones are relatively small, usually less than 1,000 feet tall, and form within months to years. They are built when gas-charged frothy blobs of basalt magma are erupted as an upward spray, or lava fountain. During flight, these lava blobs cool and fall back to the ground as dark volcanic rock containing cavities created by trapped gas bubbles. If small, these fragments of rock are called “cinders” and, if larger, “bombs.” As the fragments accumulate, they build a cone-shaped hill. Once sufficient gas pressure has been released from the supply of magma, lava oozes quietly out to form a lava flow. This lava typically squeezes out from the base of the cone and tends to flow away for a substantial distance because of its low viscosity.” (From: Priest, Duffield, Malis-Clark, Hendley II, and Stauffer, 2001, The San Francisco Volcanic Field, Arizona: USGS Fact Sheet 017-01)