State Seal – The official seal is black and white. The illustration on the state seal symbolizes Arizona’s key enterprises. Description of the state seal from the Arizona Constitution: “The seal of the State shall be of the following design: In the background shall be a range of mountains, with the sun rising behind the peaks thereof, and at the right side of the range of mountains there shall be a storage reservoir and a dam, below which in the middle distance are irrigated fields and orchards reaching into the foreground, at the right of which are cattle grazing. To the left in the middle distance on a mountain side is a quartz mill in front of which and in the foreground is a miner standing with pick and shovel. Above this device shall be the motto: “Ditat Deus.” In a circular band surrounding the whole device shall be inscribed: “Great Seal of The State of Arizona”, with the year of admission of the State into the Union.”

State Flag – The idea for the design of the flag was conceived of by Arizona National Guard Colonel Charles W. Harris and Carl Hayden, Arizona’s first representative in Congress who went on to become a U.S. Senator. Their first priorities for the design were that it contain historical values and that its colors should reflect those values. The state flag represents the copper star of Arizona rising from a blue field in the face of a setting sun. According to the Arizona Revised Statutes: “The lower half of the flag a blue field and the upper half divided into thirteen equal segments or rays which shall start at the center on the lower line and continue to the edges of the flag, colored alternately light yellow and red, consisting of six yellow and seven red rays. In the center of the flag, superimposed, there shall be a copper-colored five pointed star, so placed that the upper points shall be one foot from the top of the flag and the lower points one foot from the bottom of the flag. The red and blue shall be the same shade as the colors in the flag of the United States.” The alternating red and yellow rays represent the thirteen original colonies and the western setting sun, while the large copper colored star identifies Arizona as the largest producer of copper in the United States. The Harris flag was adopted in 1917 by Arizona’s Third Legislature.

State Tree – The Palo Verde tree, Spanish for “green stick”, referring to the green bark and thin foliage. The Palo Verde is found in the deserts and the foothills of Arizona. When the trees bloom in late spring, they look like gold. (Adopted in 1954.)

State Flower – The saguaro cactus blossom, a large white flower that blooms during May and June, opening in the middle of the night and closing the next day — surviving only about 18 hours for pollination. The saguaro is the largest cactus in the U.S. It grows to a height of 50 feet and lives up to 200 years. The saguaro cactus grows in no other state except Arizona. (Adopted in 1931.)

State Bird – The cactus wren, a brown-speckled bird that builds its well-protected nest in a cactus. The cactus wren is a very common desert resident but law protects all songbirds in Arizona including the cactus wren, so it is illegal to kill them. (Adopted in 1931.) 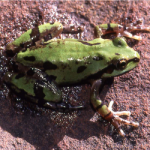 State Amphibian – The Arizona Treefrog is small, usually 3/4 to 2 inches long, a little larger than the size of a quarter. Most are green but some can be gold-colored. (Adopted in 1986.)

State Fish – The Apache Trout, which has a yellowish color and dark spots, is found in small streams only in the White Mountains of Arizona. This fish was once on the brink of extinction and is a threatened species under the federal Endangered Species Act. (Adopted in 1986.) 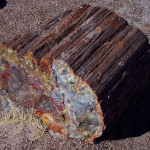 State Gemstone – Turquoise, a precious stone that can be found throughout the state and varies in color from sky blue to shades of green. Turquoise has been used for centuries in Indian jewelry and as part of Hopi, Navajo, and Zuni silversmithing traditions. (Adopted in 1974.)

State Neckwear – The bola tie, widely associated with Western wear, was designated the official neckwear of Arizona in 1973. A bola is a type of necktie consisting of a piece of cord or braided leather with decorative metal tips secured with an ornamental clasp that slides up and down. A silver bola tie adorned with turquoise (Arizona’s state gemstone) is generally considered the official style. Arizona was the first state to have an official neckwear, but in 2007 New Mexico followed suit and adopted the bola tie as their official state tie, too.

State Butterfly – The two-tailed swallowtail became the state butterly in 2001. This butterfly has yellow and black wings with a wing span between three and a half up to five inches in length.

State Firearm – On April 28, 2011, Governor Jan Brewer signed a bill designating the Colt Single-Action Army revolver as the state’s first official firearm. The Single Action Army (also known as the Peacemaker) was designed for the U.S. Cavalry by Colt’s Manufacturing Company and was popular in the West in the late 1800s.