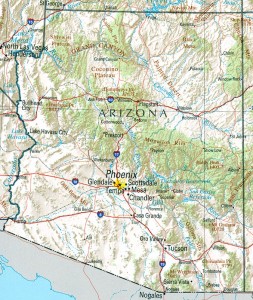 Arizona is a state located in the American Southwest. It is bordered by Utah to the north, New Mexico to the east, Mexico to the south, Nevada and California to the west. Arizona is also one of the Four Corners states, at which point it touches the southwestern corner of Colorado.

Arizona is the sixth largest state in the United States, with an area of 113,998 square miles (295,253 km2). Phoenix is the state’s capital. Other important cities in the state include Scottsdale, Surprise, Peoria, Glendale, Chandler, Tempe, Tucson, and Flagstaff.

The next most populous county is Pima County. The county seat of Pima County is Tucson, where nearly all of the population is concentrated. Combined, nearly 80% of Arizona residents live in either Maricopa County or Pima County, even though the two counties make up only 16% of Arizona’s total area.

Arizona is home to 21 federally recognized tribes, which are each semi-autonomous. The large majority are part of the Navajo Nation, which is the largest American Indian reservation in terms of population and size. The Navajo Reservation covers all of northeastern Arizona along with portions of New Mexico and Utah.

For a long time, Arizona earned most of its money from the four C’s – cotton, cattle, copper, and climate. Today, manufacturing (i.e. electronics, aerospace, metal fabrication) is the leading industry, while tourism is also very important. The warm, sunny weather together with a wide variety of natural wonders attracts large numbers of visitors.

Arizona’s beautiful landscape includes mountains, valleys, plateaus, canyons, and deserts. Due to the state’s large area and range of elevation, there is a variety of localized climate conditions. Overall, most of Arizona receives little precipitation, and is classified as having either an arid or semi-arid climate. The northern parts of the state and the mountainous areas tend to have cooler climates, while the southern parts of the state tend to be warm year round.

One Response to Arizona Geography