We went to over Labor Day weekend to visit some friends who live in Florissant near Colorado Springs. While there, we looked at Focus on the Family’s headquarters, saw the historic mining town of Cripple Creek, stood on the Continental Divide, and drove up . Due to its prominent height and location at the eastern edge of the Rockies where the mountains jut up from the flat prairie, was a symbol to pioneers and gold seekers heading west. “ or Bust” became their motto, just as it became ours (scrawled in the dust on the back of our Ford Expedition). 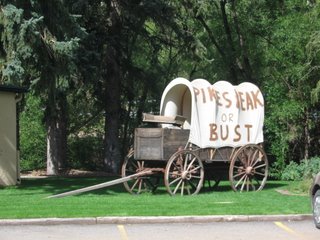 To get there, first we had to wait in a long line of about 20 vehicles at the toll gate (it costs $35 per car). Then we started out on a nice winding road through the forest. Overall the road would climb 7,000 feet in 20 miles and take us through four different life zones – Foothills, Montane, Sub-Alpine, and Alpine Tundra. 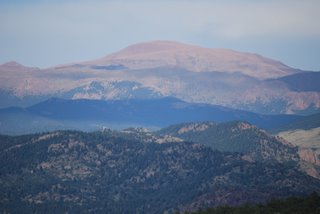 Once we got above the tree line at 12,000 feet it became a continuous series of steep switchbacks, sharp hairpin turns, and dizzying drop-offs with an appalling lack of guardrails! That means 25 minutes of sheer terror for someone (like me) who’s afraid of heights!

The road took us an hour to drive one way. Most of it is paved but part of it is gravel. The posted speed is generally 20 mph but only 10 mph at certain places. You have to put your car in low gear and be careful not to ride your brakes or they will get too hot and fail. It almost looks like a highway to heaven… and let me tell you, I for one was doing plenty of praying! 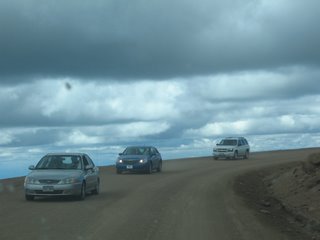 
In those days, horse-drawn carriages carried passengers halfway and mule-drawn wagons transported them the rest of the way. 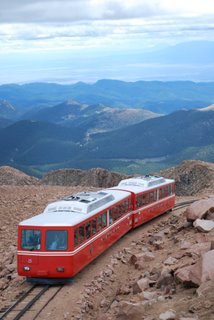 A cog railway was built in 1889, which made the journey easier for gentlemen in jackets and ladies in ruffled skirts going on Sunday afternoon excursions. In 1915, the original roadbed was improved for automobile travel. Nowadays the parking lot is filled with cars, many with out-of-state license plates, which shows that Pike’s Peak really is “‘s Mountain” and still a popular destination. In addition to a high altitude research station, you will also find a donut shop, gift store, and oxygen bar on top! 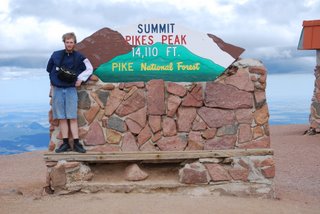 The air on the mountaintop contains about 50% less oxygen than at sea level. The two climbers in our family were fine the whole time. The rest of us had mild queasiness, breathlessness, and occasional heart pounding, but no headaches. We spent about an hour at that elevation. 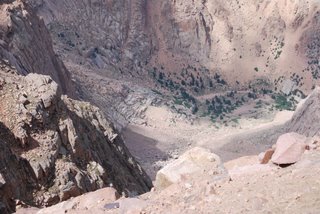 The north side of the summit provides a dramatic view of a nearly vertical 1200-ft. deep ravine known as the Bottomless Pit. BE CAREFUL! HOLD ONTO YOUR CHILDREN! Sadly, it’s been the site of a few suicides. 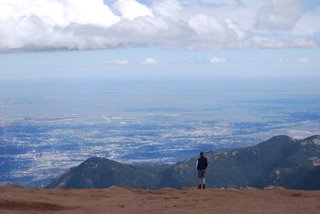 The peak temperature seldom exceeds 40F even in summer and snow is a possibility year-round. Standing in the cold thin air on the windswept summit, the view literally is breathtaking. You’ve probably heard that Katherine Lee Bates was inspired to write “America the Beautiful” based on her experience traveling to Pike’s Peak in 1893 and it’s true, we could see clearly all the way from the fruited Great Plains to the majestic Rocky Mountains (although they looked blue rather than purple), with spacious skies all around. 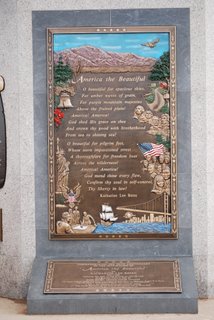 Click on the above image to enlarge it so you can read the commemorative plaque, then click your back button to return to this page. 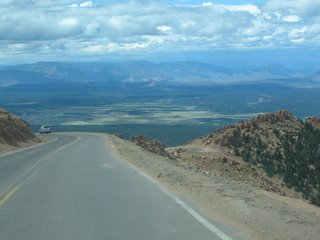 On our trip up the mountain, my 8-year-old at one point began sobbing and blurted out, “I wanted to play a game when we got home, but now I probably won’t even live to see tomorrow.” Poor little guy! As we started back down he actually fell asleep, which I think was his body’s way of handling the stress. As soon as we had safely reached the bottom he woke right up! 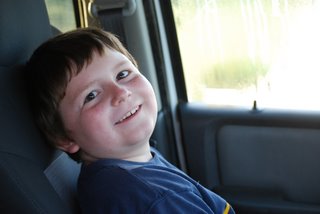 “I went up Pike’s Peak and lived to tell about it!”

The eloquent and patriotic words of “America the Beautiful” have captivated the heart and soul of an entire nation.

“Extending as far as the eye can reach, lie the great level plains, stretched out in all their verdure and beauty, while the winding of the grand is visible for many miles. Then the rugged rocks all around, and the almost endless succession of mountains and rocks below, the broad blue sky over our heads and seemingly so very near.” ~Julia Archibald Holmes, the first woman to climb 8/12/1858