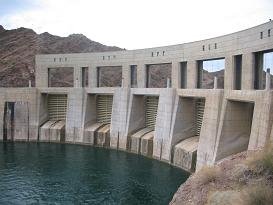 After leaving Swansea, this time we headed west at the four-way stop to Shea Road and Parker. It was actually a better, faster road than the one from Bouse. Parker has a historic AZ & CA Railroad Depot with old coach cars on display. The gasoline prices seemed to be a lot cheaper in Parker compared to other places – perhaps a ploy to get Californians to drive over to buy gas? We drove across the river and back again for what the kids called our “30-second California vacation.” We drove up to Parker Dam and passed over the Bill Williams River where it flows into Lake Havasu. It’s hard to believe it was the same river that we were picnicking at upstream. The river was so much wider here and swamp-like due to the lake water backing up into it. There are some nice state parks along there, as well as a national wildlife refuge. But we didn’t stop because we were making good time and were eager to get through Lake Havasu City so that we could find a camp site before dark.

When we were passing through Lake Havasu City, a lady pulled up next to us at an intersection, honked, and pointed to our front tire which was totally flat and we hadn’t even noticed. We drove around for a while looking for a gas station – which of course are on every corner except when you really need one! Then Rich wondered if there was a Discount Tire in that town. Almost as soon as he said that, he spotted what looked like a Discount Tire sign down the road as we were turning right at an intersection, so we turned back around and went that way and sure enough, it was a Discount Tire store. But it was going to be closing in just five minutes! Even so, they cheerfully took us in and checked our tires, and the rear tire was flat, too. I thought it may have been from a sharp rock on our off-road escapade, but in fact both tires had nails in them. I guess we must have picked them up in the ghost town? Rich has road hazard insurance with Discount Tire so that was good; and we were so thankful that those guys were willing to help us at closing time. We were lucky, too, because we would have been in bad shape if that nice lady hadn’t honked at us and we had gone camping in the middle of the desert that night, then woken up to discover that we had two flat tires and only one spare! We had a guardian angel watching over us I think!

That pit stop had put us behind on our time, but at my request we took a little detour so we could say that we had driven over London Bridge. Then we continued northward on I-95 which veered east a little bit, so when we got to I-40 we had to head west. Topock was a strange little place with a bunch of white pipelines stretching over a narrow part of the river, adjacent to the same spot where an old bridge on Route 66 entered California. It looked like I-40 climbed up a hill toward the sunset on the other side, while we got off and went north to Golden Shores. It was a tiny little town with one general store, a pizza/ice cream shop that was closed, a liquor store/gas station and a fire station. That area felt dark and isolated, but not as lonely as we were going to get later. Everywhere else we go in the state, there are either cattle roads or forest roads that we can camp along. But do you think we could find a side road to get off on? We drove and drove, and there were all these weird little circular turnouts on the side of the road but no dirt roads that went anywhere. We were speculating as to whether those turnoffs were something left behind from the busier days of Route 66 perhaps. Finally when we started getting near the mountains we found a dirt road with a maze of others leading away in different directions, probably branching off to old mines. The whole area seemed abandoned, and there wasn’t another soul around. Yet way down across the plain to the West, we could see the twinkling lights of a city – Needles maybe, or Bullhead City?