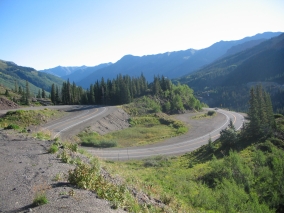 The most spectacular portion of The San Juan Skyway Scenic Byway ( 550) extends from Ouray to Silverton. The route goes by mountain passes, ghost towns, and canyon walls with waterfalls. It’s a paved two-lane highway but it’s slow-going with many sharp curves, switchbacks, steep grades, no shoulders, and an appalling lack of guardrails. 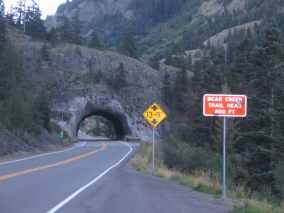 For the first seven miles south of Ouray, the byway follows the Uncompahgre Gorge. You will be driving along the vertiginous edge of a deep canyon the whole way. The weak-hearted should do themselves a favor and don’t look down to avoid having an extreme panic attack. There are several pullouts for stopping to enjoy the breathtaking views if you dare. 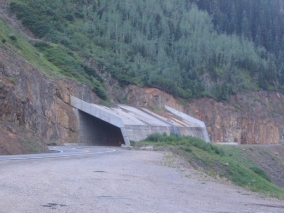 The stretch through the gorge is characterized by steep cliffs with no guardrails, and by the number of hairpin “S” curves used to drop elevation. There is a tunnel to go through, followed by a narrow bridge over , and then the road passes beneath a reinforced concrete snow shed at the deadly Riverside Slide avalanche zone. 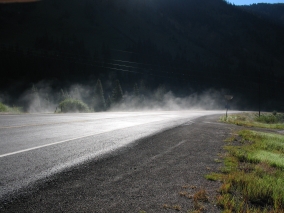 After that you will breathe a brief sigh of relief when you leave the gorge and enter a nice flat valley. It was kind of a weird marshy area, though, with steam rising and strong sulphur fumes – you know, the “rotten egg” smell. We weren’t sure if it was the leachings from a nearby mining operation or naturally occurring swamp gas.

Then the road again ascends several switchbacks past the Idarado Gold Mine. The mine tunnels extend beneath the 13,000-ft. mountains a distance of about five miles to the Pandora Mill near Telluride on the other side. (It would take more than 60 miles to get there by highway!) A portion of the trestle bridge is still standing, extending into thin air. A few houses are also still standing, awaiting renovation by the Colorado Historical Society. 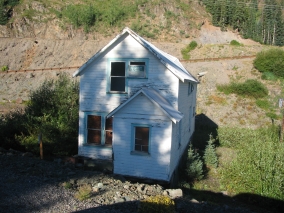 Soon the road crosses at 11,018 feet, providing views of and several ghost towns. The last large scale mine was the Standard Metals operation on which continued until late in the 20th century. From there, the highway descends through another steamy, ghostly valley to Silverton. 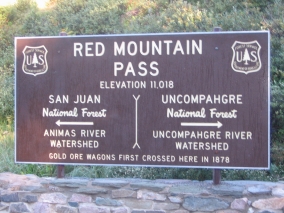 South of Silverton, the byway goes over (10,970 ft.) and (10,640 ft.), then parallels the Durango & Silverton narrow gauge railroad track before returning to . 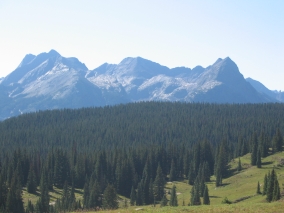