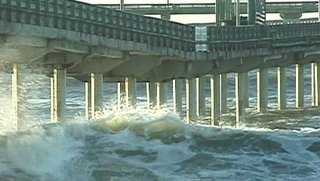 After the parade, we went to the beach. We were planning to visit Point Loma, but we got all the way there and it was $4.00 to get in and we didn’t have any cash and they didn’t take credit cards. We could have given them a check but we didn’t have our check book. I was disappointed of course but maybe it was just as well because I could see that it looked crowded anyway. Hmm, must be a lot of people from the parade decided to go there afterwards. On the way to and from the Point Loma entrance, you drive right through a national memorial cemetery. Both sides of the road along this narrow peninsula are lined with row after row of thousands of white headstones that stand out from the green grass and the blue ocean background. Its appearance was quite different from the nondescript bronze markers that blend into the desert ground at the National Memorial Cemetery in Arizona.

We headed over to Ocean Beach after stopping for a while at the Sunset Cliffs. Ocean Beach was a really nice town. It looks just the way a California town should be. It must be like what San Diego used to be like before it got so big. Ocean Beach is located south of Mission Bay and Mission Beach, just west of downtown on the Pacific Ocean at the western terminus of Interstate 8. So if you were to head west on I-8 all the way to the coast, that’s where you would end up. Newport Avenue is the main street that goes through town and ends up at the beach. The Ocean Beach Pier, built in 1966, is the longest pier on the West Coast. It was closed when we got there, though, probably due to the high waves. It seems like they experience heavy surf quite often at that spot. Ocean Beach also has strong rip currents, so perhaps it’s not the best place for swimming. There is a Dog Beach at the north end of Ocean Beach.