Driving south of Montrose on Hwy. 550 you will pass through Ridgway. The area was made famous as the filming site of the John Wayne western movie “True Grit.” We just missed their True Grit Days which was coming up on the second weekend in September. The True Grit Café is full of John Wayne memorabilia. Ridgway is also home to Dennis Weaver and supposedly Ralph Lauren. It’s a beautifully scenic area with green pastures and trees on the edge of the San Juans, with a spectacular view of . The runs through the area and they say that wild animals such as deer, elk, and bear are commonly seen in and around town. Ridgway has a state park and reservoir, both of which have trout fishing. We almost thought about stopping and camping near there, but decided to go a little bit farther to Ouray.

The San Juan Skyway Scenic Byway starts at Ridgeway and heads south through the Victorian mining town of . The area is known as “Little Switzerland” because of its setting at the narrow head of a valley, enclosed on two sides by steep granite towers and dramatic waterfalls. Ouray has a as well as an ice climbing park. In addition, the town’s motto is “Jeep Trail Capital of the World” and Ouray serves as a hub to the dramatic , , , and the infamous Black Bear Pass. Recording artist Bill Fries, a.k.a. C.W. McCall (and Ouray mayor for two terms) wrote a song called “” based on the phrase, “you don’t have to be crazy to drive this road, but it helps.” Black Bear is a difficult, dangerous trail even for 4WD vehicles and is travelable in only one direction. The road descends over a series of infamous switchbacks. It takes two hours to drive 12 miles.

Originally established by prospectors who arrived in 1875 searching for silver and gold, at one time there were more than 30 active mines in the vicinity. The town was named after Chief Ouray of the Utes, a local Indian tribe. The entire town is registered as a National Historic District with most of the buildings dating back to the late nineteenth century and many of them also listed on the National Register of Historic Places. Ouray is only about 10 miles from the famous Telluride ski resort, but with the mountains in the way it’s a 60-mile drive to get there. Perhaps due to its isolated location, Ouray is friendly and down-to-earth, with none of the pretentiousness of standard tourist towns. A walk down the main street is an authentic old west experience.

The mountains were misty with rain, and Rich and Pete longed for a nice comfortable rest after their climb. So I suggested getting a room for the night rather than camping out. Even here, most of the hotels were all booked for Labor Day. However, this led us to discover the old Western Hotel dating back to 1892. This structure is one of the few remaining examples of a wood frame hotel from the 1880’s.

Wow, talk about authentic! The lobby looks just like it did in its heyday, with stained glass windows and an ornate tin ceiling still adorned with the original lighting fixture. (One of the world’s first to have alternating current.) After checking in at the historic registration desk, you climb up a steep red-carpeted staircase. Once upstairs, you walk down a creaky narrow hallway where there are a dozen or so small rooms featuring antique dressers, brass beds covered with quilts, and lace curtains fluttering in the breeze. The walls are not insulated, and there is no central HVAC system, not even a window unit. The only way to control the temperature is by opening or closing the window. No phones, no TV, no alarm clock, and the bathroom is down the hall. (Well, actually, the ladies’ and gents’ toilets are down the hall and the – meaning an old-fashioned footed tub – is in its own separate room.)

At least it beat camping out in the cold and it sure was neat to stay in such an old-fashioned place right out of a classic western movie! Five of us slept in a tiny room with two twin brass beds – two of us in each bed and one on the floor, but that kept us nice and cozy. The proprietor (who also operates San Juan Scenic Jeep tours out of the hotel lobby) caters to hikers and jeepers, so he didn’t mind us bringing in a sleeping bag and pad to sleep on the floor.

It’s a family-owned business, too, with two sons (age 10 and 16) helping out in the dining area, mom and dad in the kitchen, and their little girl (age 6) hanging out with grandpa in the lobby. Grandpa was there until late at night and again at 7:00 in the morning, so I wonder if he lives in his own room at the hotel. Adjacent to the hotel lobby is the saloon with its original carved wood bar, historic paintings (one is an enormous western landscape; the other is a nude woman in a classic pose – just so you know!), and the famous “face on the barroom floor.” Check out their website at www.historicwesternhotel.com. 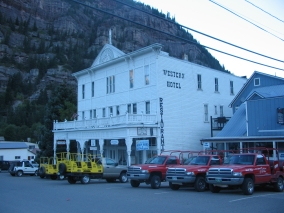