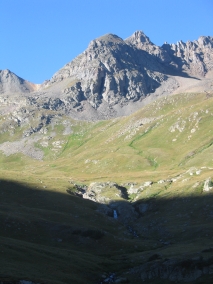 Since we were camping in the American Basin with tall peaks all around, the sun didn’t reach us until 8:30 am. It was 41º when we woke up and later it would get to be 64º. At 10:30 some clouds came by and it got colder and windy, but they blew over quickly and then it was warmer again and sunny. It was so was exciting to finally be at our destination! We had talked about this for weeks and imagined what it would be like, and now here we were finally seeing it in person. The trailhead was just up a little ways at the end of the road, but we packed up our tent and drove the rest of the way so that we wouldn’t have to walk any farther than we had to. 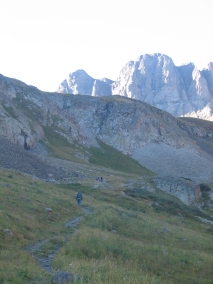 I had thought we’d all get at least part way up the trail and perhaps some of us would have to turn back after a while. But when it came time to head out, Josh felt sick and Jon didn’t feel good either. I was disappointed that I had to stay down with them and wasn’t even able to say that I had attempted to reach the top. Even so, I understood because when I was younger I used to get headachy and nauseous just going up to the higher elevation of , which wasn’t nearly as high as we were now. Over the years I eventually grew out of it, and I didn’t get a headache the whole time we were in . 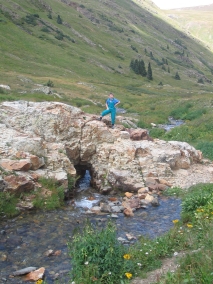 I had brought along ginger cookies and ginger candies, but the kid who should have been eating them didn’t like the way they tasted. So Josh kept throwing up all morning, until around noon he finally felt better and we walked along the stream to a waterfall. Jon wasn’t too bad, perhaps because of the motion sickness wrist bands he was wearing, but he just wanted to stay in the car and snooze. We were parked near the site of an old mine, although all that was left of this one were some tailings. 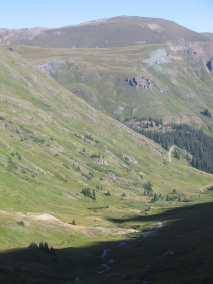 Even though we had to wait while Rich and Pete were gone for six hours, the time didn’t seem that long. I got the car organized, looked at the map, and watched people come and go. A few climbers had gotten there even before us, but the majority of them came between 9:30-10:00 am. A few others didn’t start out till the afternoon. Some people just drove up the road to look at the scenery or have a picnic and then they left again. A bunch of guys in Jeep Wranglers came by at one point and were tossing a Frisbee back and forth. I overheard them say that it didn’t glide as good in the thin atmosphere. 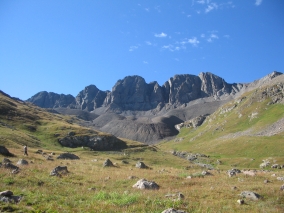 It was funny, Rich and Pete departed from the trailhead at 7:30 am. We were still freezing and bundled up. But at the same time, a group of college girls started up the trail and they were all wearing shorts! The girls were already back down at 11:00 but Pete and Rich didn’t return until 1:30. I thought maybe the girls hadn’t gone all the way to the top of the peak, but Rich rolled his eyes and said that they had indeed been at the top. People who live in must be in good shape for that sort of thing, at least as far as their lung capacity goes. Even with all of our hill climbing, we were at a disadvantage coming from a low desert elevation. 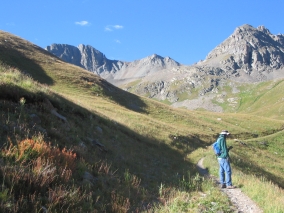 I could only see Rich and Pete going up the trail for a short distance after they left. From the trailhead, the trail climbs up the grassy slope of the basin towards a ridge immediately in front of us and then zigzags to the left. After that I had no idea what direction they were in or even which peak was Handies, there were so many peaks around there. Apparently Handies looks more like a rounded ridge anyway. 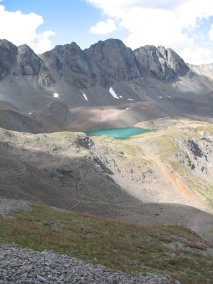 Along the way to Handies Peak, Rich and Pete passed by , a beautiful alpine lake. Signs at various intervals remind hikers to stay on the trail to avoid erosion of the fragile tundra. Approximately one and one-half miles from the trailhead and just below , the trail turned to access a moraine ridge. 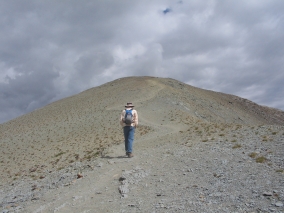 Rich and Pete made it to the top of Handies, so I was glad of that because the whole reason why we had come here in the first place was because of Rich’s wish to climb a 14,000 foot peak. Rich and Pete thought they were on a false peak until a guy came by and told them that was THE peak. Rich said the trail had swung around so they must have been close up above us but couldn’t see us. It was like being in the middle of a primitive wilderness, because all they could see were mountains for miles around. Fortunately they took lots of pictures so that I could see what they saw. 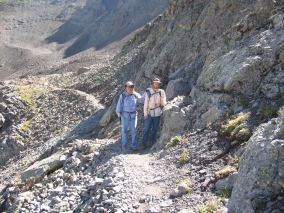 According to their GPS, the trail was 2.5 miles long each way. The elevation gain was about 2600 ft. They started out at 7:30 am, reached the summit at 11:30 am, and got back down at 1:30 pm. At 14,048 feet, Handies Peak is among five other 14,000 foot peaks in the area (Sunshine Peak, Redcloud Peak, Uncompahgre Peak, Wetterhorn Peak, and Mount Sneffels), as well as numerous high thirteeners. Rich said that the panoramic view from the top looking out over the summits that surrounded them was incredible. 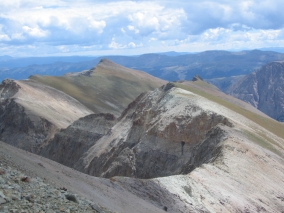 As soon as the guys got down from the mountain, we wanted to start heading back because it would be a long drive home. However, we were reluctant to return the same way we came, so we decided to continue east to . From there we would have to drive north, then west, then south to go all the way around the . Even though it would take us 160 miles out of our way, we figured it would be better than getting stuck forever at that one bad spot. 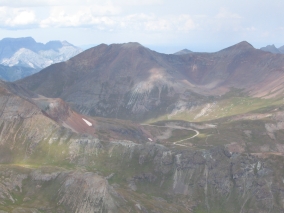 The road to is supposed to be a 2-wheel drive road, but the stretch just east of still seemed awfully rough for passenger cars. It’s a really narrow dirt road, and as we got closer to we were driving along the edge of a cliff – on the outside edge. Then a car came from the other direction and there was no place to pull off and barely enough room to pass. Yikes! If you’re afraid of heights do not go that way! Haven’t the folks in ever heard of guard rails? 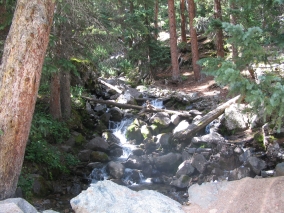 Even the streams and waterfalls in the highly mineralized San Juan Mountains have a silvery appearance.

http://www.co.blm.gov/gra/gra-american.htm ( trail description and maps, from the Colorado BLM.)

http://www.14ers.org/page.php?pname=peaks/sanjuan/handies/standard (Detailed information on the including photos, maps, and elevation profiles.)

http://en.wikipedia.org/wiki/San_Juan_Mountains (An amazing 360° panorama of the southwestern San Juans, photographed from the Gold Hill Ridge of the Telluride Ski Resort. Ridgeline annotation indicates the names and elevations of 43 visible peaks.)