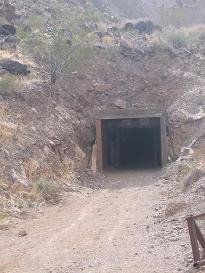 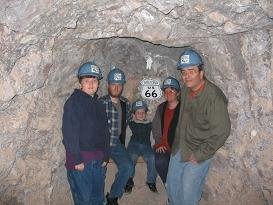 Located 2½ miles east of Oatman, AZ on Historic Route 66, the Gold Road Mine offers tours to the public. It’s open daily from 10:00 am to 5:00 pm. We were there bright and early on a Sunday morning for the first tour of the day. We were the only ones there at that time, too, which was great because our family had the tour all to ourselves and it was like we had our own personal tour guide. He was a great guy, too, and we gave him a tip afterwards which he obviously appreciated. The basic one-hour tour is $12 for adults and $6 for kids 12 and under. Group rates are also available at $11.00 per person for groups of 10 or more.

The Mine Tour is a walking tour, but transportation is available for the physically challenged. First, you will meet a nice lady in the main office. You are required to wear a hard hat and sign a liability waiver. Have your kids go to the bathroom there before you head up to the mine. For the tour, you will be transported in a tractor-like vehicle up to the mine entrance. The guide will take you into the mine approximately one-eighth of a mile. The mine is well-lit and there is safety fencing blocking off certain areas. You are invited to bring along your camera or camcorder and take as many shots as you please.

Going into a real underground gold mine was an exciting experience, and the tour guide was interesting and informative. He helped us to imagine what it must have been like in the old mining days. He shows you side shafts, mine cars, an elevator, a “widow maker” drill and other equipment that they used. At one point you can gaze down into a 1,400 ft. deep dark pit, but the wire fence was bowed out from people leaning on it to get a good look, so you wouldn’t catch me getting too close! About half way through the tour you will be standing directly under Route 66, which is a good picture-taking spot. Then the guide takes you into the original “Glory Hole” where you can see the gold-filled quartz veins. We even got to see a real tectonic plate that was exposed and lines one side of a shaft – it looks like a large flat smooth slab of rock.

Hard-rock miners worked three shifts a day, drilling, blasting, and hauling. Then the ore would be soaked in cyanide to extract the gold. Some quartz veins contain a higher percentage of gold than others, and the lesser quality veins are left in place because it’s just not worth the trouble to dig them out for such a low concentration of the yellow metal. At the end of the tour they let us take a bunch of ore samples home – which in itself was worth the price of the tour for us rock hounds!

It was in 1900 when a Mexican prospector named Jose Jerez was out searching for his lost burros. He stumbled over a chunk of quartz that glistened brightly in the midday sun. Upon examining the rock, Jose saw that it contained some gold. He took it in to have it assayed and it came out to 40 ounces per ton. Some investors purchased his claim, which then changed hands several times. By the end of 1907, the Gold Road Mine had reportedly produced 140,625 ounces of gold worth $2,250,000.00. Since then, the Gold Road Mine has been in production on and off now for about a hundred years.

During World War II, the government needed other metal types for the war effort, so the miners were taken to other areas and the Oatman mines were closed. The Gold Road Mine was re-opened in 1995 and it produced about 40,000 ounces of gold annually until the market price of gold dropped in 1998. Production costs alone were $271 per ounce, so most of the workers were laid off and moved away while the gold in the mine awaited a better day. A few employees stayed behind to provide these great mine tours. We were told that the mining company recently invested in some new equipment and may be getting ready to gear up production again once the gold price is right.

Visit www.goldroadmine.com for details on the Gold Road mine tour. Also click on “Mine Safety” for important information about the hazards of abandoned mines – a must-read if you plan on exploring the area. Curiosity can be deadly when it comes to old mines. So if you’re tempted to venture into a real gold mine, do it safely and enjoy this exciting guided tour.