You can see some outcroppings of lava along I-40 near Grants, but that’s just a hint of what is contained within El Malpais National Monument. This national monument in the high desert of northwestern is covered with lava flows, cinder cones, pressure ridges, and lava tubes. In satellite images (such as Google Earth), a large lava bed southwest of Grants looks a lot like a huge lake. 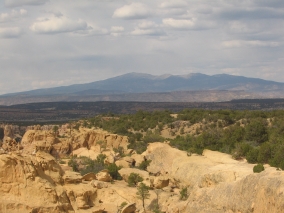 El Malpais is Spanish for “the badlands,” but it seems like a good place to me – it’s a unique environment full of geology and history that’s suitable for hiking, spelunking, scenic driving and primitive camping – plus there isn’t even an entrance fee! Despite the rough and rugged volcanic terrain, El Malpais also contains prehistoric ruins, ancient , rock structures, and remains of homesteads. 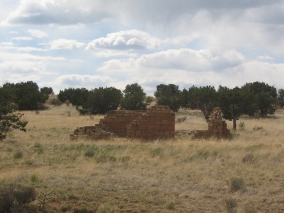 There are two Visitor Centers in El Malpais, one on State Highway NM117 and the other on NM53. The on NM53 seems to be the busier of the two, and it has a large bookstore. The on NM117 was quieter and the interior was like a museum, with extensive displays on the history and geology of the El Malpais area. It’s well worth stopping there to see the exhibits! Be sure to ask about the Junior Ranger program which will give the kids something to do as you explore the area, too. 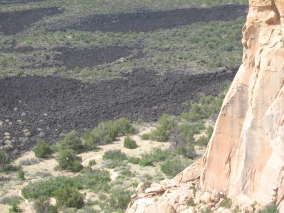 State Highway NM117, which runs along the eastern border of El Malpais, provides a 30-mile scenic drive along McCarty’s Lava Flow. This is the youngest flow, dated between 2000-3000 years old. In fact, it’s one of the youngest basaltic lava flows in the world. Black lava deposits – both rippled and jagged – lay across enormous stretches of the landscape, interspersed with bushes and other vegetation.

This side of the park also provides access to breathtaking sandstone bluffs and an impressive natural rock arch. La Ventana Natural Arch, the largest in , can be seen about 20 miles south of I-40, just west of NM117, in the sandstone cliffs that flank the lava to the east. 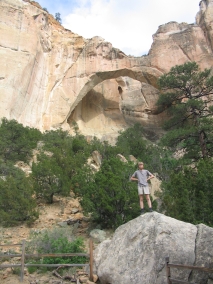 State Highway 53 follows the northern boundary of the monument, paralleling the El Calderon Lava Flow which is much older. If you have a high clearance vehicle, you can also travel the western portion of the monument by way of County Road 42, which is a 32-mile dirt road known as the Chain of Craters Backcountry Byway. There are supposed to be as many as 29 old cinder cones and craters in this area.

Although you can see lots of lava formations while driving in the car, the best way to experience El Malpais is by hiking through it. Be sure to stay on the trails, take plenty of water, and don’t let kids go running up ahead because the lava contains deep fissures as well as having sharp edges and being generally unstable. Also, some routes are not that obvious and are marked only by of lava rocks.

Seasoned hikers may take the seven-mile Zuni-Acoma Trail, an ancient Indian route that crosses the lava between NM 117 and NM 53, between the two major Indian pueblos that ’s expedition encountered in 1540. The most popular trail is a scenic 3-mile trail off NM53 that leads past large lava caves, huge sinkholes, and an impressive cinder cone before heading back to the parking lot. 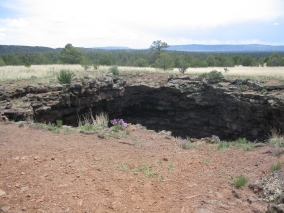 As you explore the area, you will see that the weathered lava rocks are generally black on the surface, with a lighter, pinkish-gray color underneath due to a longer cooling time and less exposure. Many lava features in El Malpais have Hawaiian names because early scientific knowledge of volcanoes was developed in the . For example: sharp, jagged lavas are aa (pronounced ah-ah); and smooth, twisted lavas are pahoehoe (pah-hoy-hoy). But some of the geological terms for surface features on lava flows were first defined in , not . 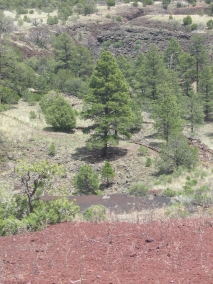 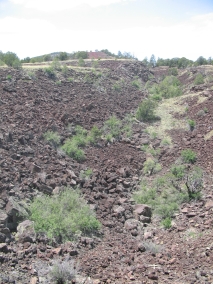 El Malpais National Monument and the adjacent BLM land contains lots of lava tubes, a.k.a. lava caves. Lava tubes are formed when lava flows through the earth’s crust. As the outer edges of the lava cool and solidify, the molten lava in the center continues flowing and eventually drains away, leaving an empty tunnel. The lava tube system in this region supposedly extends at least 17 miles. When a portion of the tunnel roof near the surface collapses, it creates an opening that you can climb down into. This forms a cave that usually has a dead end, but we went into a tube that had an opening on both ends so we could go in one side and out the other. 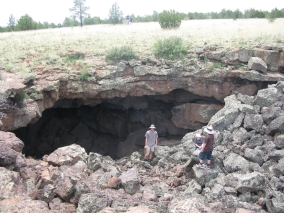 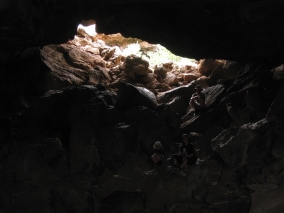 Adjacent to El Malpais National Monument is the Bandera Volcano and which is a private park that charges an entry fee. The ice cave is a collapsed lava tube that stays a constant 31º F year-round and has a layer of ice that’s estimated to be 20 feet thick. We did not stop there because we were trying to save money on this trip and we had already gone into a lava tube and walked around a volcano rim for free at El Malpais National Monument. I think Bandera is the largest crater in the area, though, and I’m sure it would be interesting to see the ice cave too – maybe next time!