This trail on the west side of Daisy Mountain apparently had been there long before the master-planned community of Anthem was built, because the Boy Scouts all knew about it. In fact, a friend of ours who is a Boy Scout led the way for us. He had gone up and down the mountain several times as training for a hike. My husband was taking this opportunity to start getting in shape for climbing Humphrey’s Peak. I just wanted to see what the view was like.

It was 68° when we left our house. At about 8:47am we met in the Anthem Walgreens parking lot and at 9:00am we started walking. We had to cross the street and go into a gated community (closed to cars but with an opening for pedestrians). It was tiring just walking through the neighborhood streets because the development was built on a slope so it was all uphill. We passed a golf course and turned up a road past a cluster of mailboxes. I don’t remember any of the street names and all of the houses look the same.

By the time we reached the back edge of the neighborhood where it meets the mountain, we had already gained considerable altitude. From there it was a steep climb on the path up the mountain. Actually, we didn’t even make it to itself as we thought we would. The trail continued on in that direction along the ridge, but when we got to the top of whatever side peak this was, we decided to turn around. Even though this was a terrible year for wildflowers, we still managed to see a few and the ocotillos were blooming quite nicely. 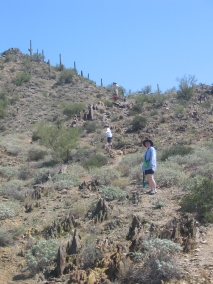 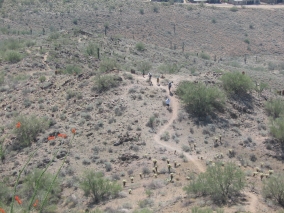 This trail was a lot steeper, for a longer distance, than last week’s hike. I thought my legs were going to be sore for a week after this one, but by the next day they were fine. Our youngest son just turned 7 and one minute he would be whining and asking to be carried. The next minute he would be running up ahead with the older kids. So I guess he couldn’t have been too tired – just wanted a free ride! The walk back down the mountain didn’t seem to take nearly as long as the hike up (as is usually the case, thank goodness!). But trudging once again through the endless maze of neighborhood streets seemed to take forever. By this time we were really hot, tired, and thirsty. When we finally got back to the car at 1:00pm, the temperature was 87°.

Posted under Uncategorized and tagged with hike, mountain
Comments (0)