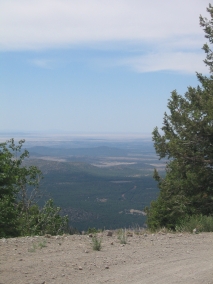 You can either hike or drive to the top of Bill Williams Mountain (9,256 ft.), where there is a lookout tower that you can climb (at your own risk) for an even higher view. The lookout tower is manned, so if you’re brave enough to go up there, the ranger may let you in and show you around. It’s cramped quarters, though, with barely room enough for four visitors at a time. It was super windy when we were there, especially on the open stairway up to the tower. I’m scared of heights so I stayed down by the car but the guys all went up and got to go inside the tower. In addition to the lookout tower, there are a couple of small buildings and numerous communications equipment at the summit. 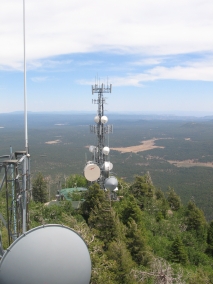 We drove up the mountain because the hike takes six hours and seemed like it would be a little difficult for the younger kids and me. To drive there, simply take Forest Road 173 () south from 4th Street in downtown Williams and after about five miles, turn west onto FR111. The road is well-graded and four-wheel drive is probably not needed, but it’s steep with many hairpin turns as it winds its way up to the top. I wasn’t as scared as I thought I’d be because the road was pretty wide and lined with trees, which meant that at least we weren’t on the edge of sheer drop-offs or anything, even though we were really high up there and the views were breathtaking. It’s supposed to be a popular drive in the fall for seeing autumn colors. 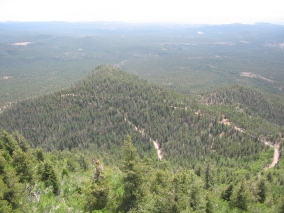 On our way up, we passed a couple who were riding bikes to the top. We passed them again on the way down, but they were almost there by then. It was certainly a tough ride up, but must have been quite exciting going back down! 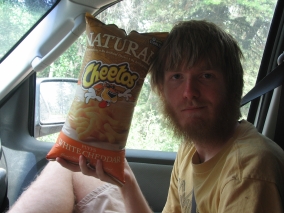 Also as we were going around one of the curves, I spotted a dog tied to a tree just off the side of the road. We stopped to check on him and he didn’t look hungry or thirsty or anxious, so hopefully everything was okay. Perhaps his owner was just letting him rest there in the shade of the tree while he went off on a hike or something. There are some nice campsites along the first part of the road under the pine trees on the edge of the meadows. We’ll have to keep that in mind for next time.

, the town of , and the in western were all named after William Sherley Williams, a.k.a. Bill Williams. He was a mountain man, hunter, scout and guide who traveled through the Mogollon and Little Colorado River region of in 1837, living off the land and trapping beaver. Then he headed west across the Colorado Plateau to the Colorado River, thus completing his only known visit to what is now Arizona. Williams was killed by Ute Indians while transporting baggage for the expedition in 1849.

While is a lone peak, it is one of a series of lava domes also consisting of and , which rise along a fault line stretching west from Humphrey’s Peak.