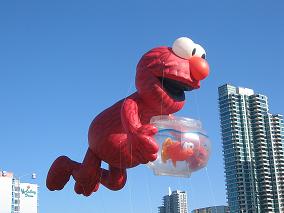 On Thursday morning my 11-year-old son woke up first. He looked out the window and said “Hey, there’s a bunch of balloons!” Having no idea what he was talking about, I got up to look and I couldn’t believe my eyes. An empty parking lot across from our hotel was being used as a staging area for a parade! They were inflating the balloon floats which included Beetle Bailey, Clifford the Big Red Dog, the Cat in the Hat, and what looked like a giant Oscar Meyer wiener. Well, that was pretty cool. We would get to see a parade while we were there besides! That explains why the day before I had seen a sign that said Harbor Drive was going to be closed on December 28 due to a special event. We would be able to walk right over to it without having to worry about parking or anything!

So we all got up, got ready, and went out. By this time some marching bands and drill teams were also there practicing, and a Texas A&M; truck kept driving by playing music. In addition to the balloons, when we walked down North Harbor Drive past the County Administration building, there was a line-up of other floats, too. This was going to be a pretty big parade. As we got closer to the grandstand area, a lady handed us a program for the annual “Port of San Diego Big Bay Balloon Parade.”

I didn’t realize that The Port of San Diego’s Big Bay Balloon Parade was recognized as “America’s Largest Balloon Parade.” The one-mile parade route was going to feature more than 30 inflatables, more than any other parade in the nation. This year’s theme, “It’s a Wacky World,” explained why there were so many crazy cartoon characters. We grabbed some breakfast at a deli down the street, while at the grandstand they were having wiener dog races. Then we walked down to the other end and saw the Bumble Bee Foods 5K runners take off at 9:45 am. The parade started at 10:00, and we saw all of the balloons come by that we had seen getting set up earlier.

The best balloon we thought was a giant Elmo holding a fish bowl, and the goldfish inside was a free-moving inflatable as well. Of the other floats, our favorite was the Legoland Brickmobile. Jon got right up there and managed to get a special Pirate Duplo piece that they were tossing into the crowd of bystanders. He was really lucky to catch one of those for his collection! We also got a couple of foam footballs that some firefighters were throwing off the back of their fire truck. There was a neat bubble-making machine bringing up the rear, and the San Manuel Marching Miners from Tempe, Arizona were there. The Texas A&M; marching band’s presence was because their football team was going to be playing in the Holiday Bowl.

There’s no better way to spend a sunny San Diego day with the family than along its wonderful waterfront, and being able to watch a parade while we were there was an unexpected surprise! So if you ever go to San Diego between Christmas and New Year’s be sure to catch this parade. Grandstand tickets were $15 and had to be purchased in advance, but there was plenty of room to view the parade from streetside for free, and people were even watching from their hotel balconies.

This was one of the nicest parades I’ve ever been to, and I don’t think I’ve ever seen a balloon parade in person. The colorful floats combined with the beautiful harbor views made for an unforgettable experience. And what a perfect day for a parade! They were so lucky it wasn’t the day before! This day was blessed with a clear blue sky and a light sea breeze, quite the opposite of the stormy previous day that blew down trees!
We were at the head of the parade route, so as soon as we saw the last float, we walked back to our hotel to beat the crowd before everyone else started departing. When we got there we turned on the TV, and the parade was being televised live from the grandstand area which was farther down along the parade route, so it wasn’t even over yet from their point of view. So we got to watch the last of the floats go by again that we had just seen, but this time with commentary!
Posted under Uncategorized and tagged with parade, San Diego
Comments (0)