Got Pack Rats? Get Rid-a-Rat! 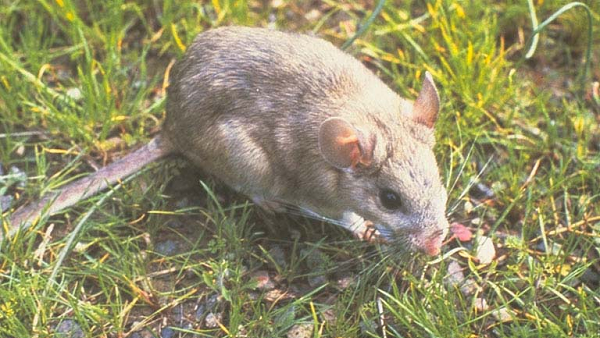 There are 8 species of woodrats (rodent genus Neotoma) in North America. These rats are commonly called packrats or trading rats. Packrats live anywhere from hot, dry deserts to cold, rocky mountain slopes. They are found in southern states, southwestern desert areas, and the western U.S. north to Canada. Nationwide, packrats are considered a minor pest; however, in certain places they can be a major problem – like where we live!

Packrats are distinguishable from Norway rats by their big ears and hairy rather than scaly tail. As the name “packrat” implies, they are known for their habit of searching for things to bring back to their nests, creating an ever-expanding collection. They are especially fond of small shiny objects such as jewelry, coins, utensils, can tabs, and other such items. If something catches their eye, they will often drop what they are currently carrying and “trade” it for the new found treasure; thus the nickname “trading rat.”

In the wild, packrats live in rocky crevices and underground burrows. They build complex dens called “middens” made of twigs, cactus joints, and other materials. These middens contain several nest chambers, food caches, and debris piles. Ancient packrat middens are of great interest to archeologists as they record the change in vegetation over time. However, recently inhabited middens are a health hazard due to the danger of hantavirus from rat droppings and the presence of disease vectors like kissing bugs, fleas and ticks. 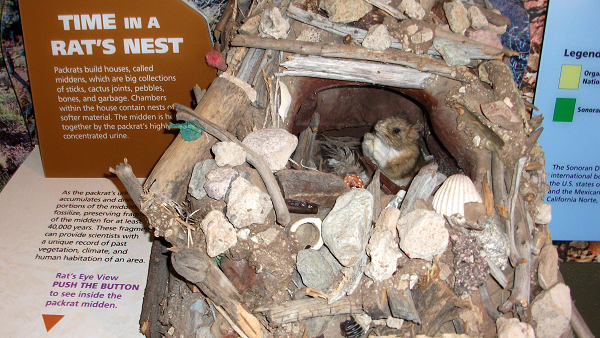 When close to human habitations, packrats will move into piles of wood or junk, crawl spaces, outbuildings, barbecues, hot tubs, and cars. They love vehicles, whether sitting unused in the yard or driven every day. The rats chew on wires, rubber hoses, and anything they can sink their teeth into. Packrats are nocturnal and most active in the spring when they’re nesting, as well as in the fall when they’re looking for a nice warm place to spend the winter. If you live in an area with an abundance of packrats, inspect your vehicles regularly and check for cactus balls around your car, tiny footprints on top of your car engine, and bits of fur stuck under the hood.

Our family car is a Ford Expedition that’s driven every day, and yet several years ago one stubborn packrat managed to do $4,000 damage to our only means of transportation! At first we didn’t realize the rat was stuffing every nook and cranny in the undercarriage with mesquite bean pods. But then it started chewing insulation, gnawing wires and hoses, and filling the engine compartment with cactus pieces. We tried everything to get rid of it, to no avail.

The last straw was, our car wouldn’t start when we were leaving to go to our aunt’s house on Thanksgiving. For the next four days we waged an all-out war, trying every kind of trap and poison there was. In our minds the rat was evil incarnate. If you’ve ever seen the movie Mouse Hunt, that was us! We finally got the rat and had the car towed to the shop. With the car all taken apart, they found a huge rat nest on top of our gas tank. The rat may have been riding around with us for months!

Rid-a-Rat to the Rescue

It wasn’t until after that horrible experience when we heard of Rid-a-Rat, a small company that manufactures a device by the same name. Designed by an electrical engineer and tested in the Sonoran Desert, this ingenious invention has a bright flashing strobe light that annoys the rats and keeps them away. Now we swear by this product and have several of them. We’ve left our cars in the driveway for a week at a time with the units installed under the hood while we were gone, with no sign of rats! You can also put them in any other enclosed space that packrats get into.

There are three types of Rid-a-Rat units:

The RC-2 attaches to the car battery (don’t worry, it won’t drain your battery). The RC-2B comes with an external battery pack for 6AA batteries. The RC-4 is a slightly larger unit that has an internal compartment for 2AA batteries. They all work the same way, it just depends on which type you prefer. Each unit has super strong magnets on the back that hold it in place, so it won’t come loose even if you go four-wheeling or live on a bumpy dirt road like we do. You can just put it in and forget about it.

In larger vehicles you may want to get two Rid-a-Rat devices to mount in different places to make sure the whole engine compartment is illuminated. It also helps if the units are positioned so the rats can see the flashing light when they come up from underneath. If you’ve had rats previously, it’s a good idea to use an enzyme cleaner before installing the Rid-a-Rat unit, to eliminate the smell of prior occupants. If you don’t do that, the scent will keep attracting new rats, like hanging a “vacancy” sign on your car!

Rid-a-Rat builds their products in Cave Creek, Arizona. The devices are sold on Amazon and in select Ace Hardware stores. They also ship to other states and internationally. For more info, see: www.Rid-a-Rat.com. Or BUY NOW at Amazon.com!