The Oatman Hotel is listed on the National Registry of Historic Buildings. It has 10 rooms and is the only two-story adobe building in Mohave County. The Gable/Lombard Honeymoon Suite has been refurbished to the period when Clark Gable and Carol Lombard stayed there. The legendary Hollywood couple often returned to the place where they spent their wedding night in 1939. It is said that guests and staff can sometimes still hear the pair whispering and laughing in that room.

The ghost of “Oatie,” an Irish miner, is also said to haunt one of the guest rooms. One time a professional photographer took a picture of the empty room, and a ghostly figure appeared in the developed print. We were able to peek inside those two rooms, but most of the others were closed. The rooms were small, the bathrooms were down the hall, the furnishings were antique, and the floor was creaky, but we didn’t sense anything spooky. Quite the opposite, it seemed pleasant and I kept thinking how the place must have been pretty lovely and lively in its former life. 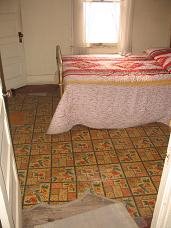 Although we didn’t see any ghosts, a strange thing happened to us while we were in Oatman. There was an old car – an Edsel I think – painted primer gray with whitewall tires and a historic vehicle plate. That car seemed to appear and re-appear everywhere we were. We were joking amongst ourselves saying that it must be the phantom car of Oatman or something. The driver always stayed inside the vehicle and all I could see was a shadowy figure dressed in black. Later on at home when I was telling my mom that story, she suggested the possibility that he may have been stalking us. So that got me to wondering, and gave me a creepy feeling when I started thinking about it. 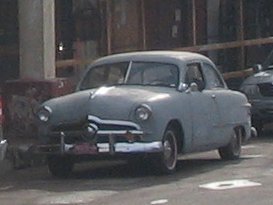 Since we had camped in the area overnight, we arrived in Oatman way early in the morning before the shops were open, so it was kind of neat that we had the place all to ourselves before the tourist crowd arrived. We walked up and down Main Street, then visited the hotel. The first time we saw this unusual car, it was parked off to the side at the top of the street. Then when we were standing in front of the hotel, I asked Rich if he could walk down the street a ways to take a picture. The minute Rich walked away, that car started up, made a u-turn, and pulled up right next to our three boys. I was standing on the other side of a big post so I still didn’t see the driver. Rich had snapped a quick picture and came running back so he wasn’t gone very long and we walked away. 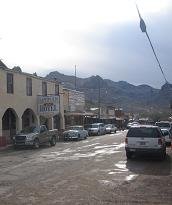 Soon after that, we got in our car and left Oatman, but we decided to stop at a gold mine on the outskirts of town. Oatman is located on a desolate mountainous part of old Route 66, and after leaving town the road starts winding up the mountainside. When I looked back to see Oatman one more time, I noticed that the old car was also leaving town in the same direction that we were going. Well, we decided to stop at a gold mine on the outskirts of Oatman, and when we were stopped at the gold mine I saw that car going up the mountain road past us. So it should have been long gone by the time we got out of the one hour gold mine tour, right? Well, after the tour we got back on the road, continued on up the mountain, came around a corner, and there it was! It was parked up at the top of the hill above the mine, as if waiting and watching for someone (us?) to come by.

Now that was uncannily reminiscent of Steven Spielberg’s “Duel” thriller starring Dennis Weaver. In that movie, a mysterious truck with an unseen driver kept following him and trying to run him off the road, which was in a desert canyon country just like this. I kept watching for that car the rest of the day expecting it to turn up again somewhere, but once we left the Oatman area I never saw it anymore. It did show up in one of the photos that we took, though! Hmm, I think that scenario would make for a good imaginative story starter.

Bu the way, the road from Oatman to Kingman is steep and narrow with several sharp hairpin curves, not suitable for vehicles over forty feet in length. The road to Oatman from Topock is not nearly as steep and doesn’t seem like it would be as dangerous, although we saw more roadside crosses between Topock-Oatman than we did on the Oatman-Kingman road. Please drive carefully! 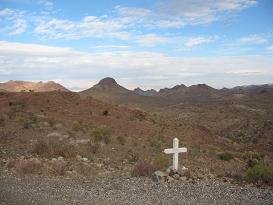